Today I accompanie Annie Bernauer & Marg Roberts’ year 5 class to the Central Market in Adelaide to explore both Chinese and Indonesian culture and language.

Marg earlier this term spent some time talking to her students about Chinese New Year and I have always wanted to take a class to central market to do an Indonesian trail, so we collaborated and today was the result. Marg did all the transport organising as well as notifying the CM that we would be there whereas I did the trail.

Brent Bloffwitch, the INTAN  president, kindly sent out a group  email to all members for me asking if anyone had a trail that I could use. I had 2 replies and both were great. One of which was from Kaye McGeever who told me about a  folder  put together by the White lotus group. It is amazing although a little out of date, and included detailed sections on different shops. Using the folder as a basis, I headed to Central Market last Thursday to research the trail.

I began with the Chinese Entrance and then instead of the restaurant that used to be just inside the entrance that had brownish pekin  ducks hanging up in the window for sale which is now a fancy modern restaurant  I included the Taiwanese Bubble Tea place directly opposite. I bought a papaya bubble tea with soy milk & pearly tapioca which was delicious. I then went to the Bali Corner Restaurant stall in the Food Plaza and booked our meals. Abdul gave me an invoice for 28 nasi campur and 6 gado gado! He also gave me a potato pegedel to try which is easily the yummiest I have ever eaten! I then headed off to see if the Chinese Medicine place still existed. It did while it had moved around the corner but unfortunately it was too small inside and also it was more like a doctors clinic, so it didn’t feel right to have groups of students walking in and looking around. So that too was crossed off. I then headed to the Food Court which was air conditioned thankfully and after tallying what nationalities were represented there, found unsurprisingly that the Chinese food out numbered all other significantly!  I then finished up with a visit to Kim Wang Supermarket to find the buddhist shrine that used to be at the back of the shop. Unfortunately I couldn’t find it anywhere, so instead I wrote some questions are kecap manis which all students know and love and then a question about the pigs trotters and chicken feet in the front freezer. I then finished up by asking them to find something in the shop that was unfamiliar and came from Indonesia. 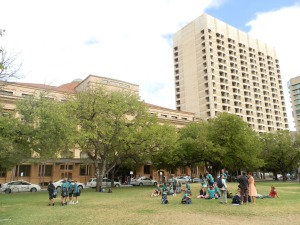 Our excursion today was fantastic. It was so well worth all the preparation and effort not to mention doing it on a day I don’t work! There were so many aspects I loved.

Firstly I loved the fact that my group grasped each and every opportunity to speak to Indonesian speakers.  They were so excited about getting the chance to use their Indonesian with Abdul at Bali Corner, that they could barely contain themselves to get it out and were all speaking over each other! Abdul was awesome, very patient and very encouraging. Even when the students had mental blocks or made mistakes they persevered and thoroughly enjoyed communicating with him. It really impressed me but when I thought about it further, I realised that this is the result of our many Indonesian visitors. PEPS students are generally relaxed and eager to communicate with Indonesians because they have had many opportunities to do this. Firstly in 2003 with Bi Anas and Bu Siska (Flores) then again with Bu Anas in 2005. Our next visitors were Bu Febi (Lombok) in 20009 & 2010 and Bu Arfa (Kalimantan) in 2010 and then in 2011 we had several visitors from all over Indonesia: Pak Agus (Bali), Bu Indra (Sumatra), Pak Usman (Sumbawa) and finally  Pak Asep & Bu Valentina (Jakarta).  How EXCITING!

Another thing I absolutely loved was spending a lot of time out of the classroom with a small group of students and having the opportunity to get to know them better. I had a terrific bunch of students and the best thing was that they had chosen to be in my group! How Cool! I had time to joke around with them, talk to them about non school things, and point out interesting things in the market that would have been really difficult with a whole class. 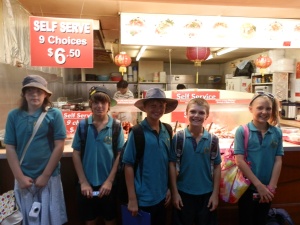 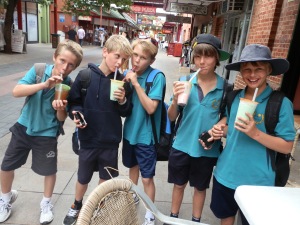 Our lunch from Bali Corner in the Food Plaza was amazing . The students that ordered nasi campur were delighted with their food. Apparently the opor ayam and the rendang were fantastic. My gado gado took me right back to Indonesia even though the vegies were all Aussie ones: bean sprouts, cabbage, carrot & potato! The staff at Bali Corner were just so friendly and so encouraging of all students to use their Indonesian as much as possible! Students were all asked ‘ayam’ or ‘sapi’? All communication was in Indonesian and for students who lacked the confidence, it was repeated in English and then followed up with encouragement to answer in Indonesian! Just loved their manner with our students.

What a fantastic day and one I am sure all students enjoyed and hopefully they take home many great memories.

To finish up: walking back to the bus, Brayden and Cooper both said they want to go back just so they can say Hi to Abdul!

One thought on “Central Market with Year 5”