One of emphases of TPRS/TCI is for the whole class, including the teacher, to stay in the TL (Target Language) and in the USA, there is a 90% target! We don’t have any such emphasis in the Australian Curriculum, in fact our curriculum appears to largely expect teachers will teach in English.
In order to not only record our progress of how many minutes each class stayed in Indonesian in each lesson without blurting (speaking in English) but also to add a level of competition between classes, I introduced the student job of timing just this. A student in most lessons now sits at the back of the room with an ipad, next to the Pembantu Guru, whose job it is to squeeze a plastic pig loudly each time any English is spoken. This is easily the most favourite job we have so far explored! Each time the pig is squeezed, the timer (Penghitung Waktu) stops the timer and records the time. At the end of the lesson, if a new record was achieved, it is added to the board. The second number alongside is the total number of repetitions we get in a lesson of the target structures.
Here is the first photo I took in week 4 with the very first scores: 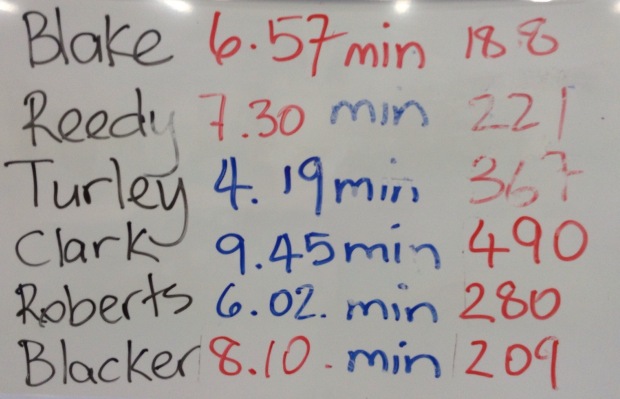 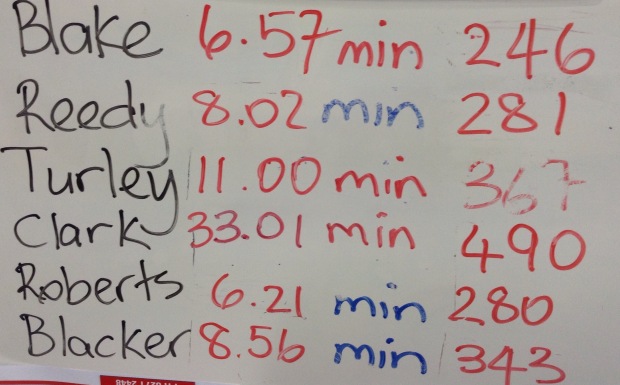 The funny thing about this latest shot is that 6/7 Turley came in to class and were determined to beat their score. They agreed it was pathetic that the 6/7 class had the lowest time. They tried and tried and yet someone would blurt out in English after just a few minutes. Finally with 11 minutes to go, they all realised this was their final chance and it was so impressive how they all dug deep to keep a lid on their blurting. It was such an accomplishment for them. The very next class though, was the other 6/7 class. When they walked in and saw that they were the only class yet to beat their initial score, they all decided then and there to not only set a new PB, but to also totally thrash the other 6/7 class. And boy did they ever!! 33 minutes was far in excess of what I was expecting from any class in first term!! I had actually said to classes all I’d really hoped for was 10 minutes!! What made me smile though was that whenever a 6/7 student asked, ‘Boleh saya Bahasa Ingris?” The rest of the class would shout “Tidak boleh!”
So now there is a huge inter class competition between the two year 6/7 classes!! I don’t know who is more challenged by this determination of the two classes to only use Indonesian in class; them or me!! My challenge is that whatever I say has to be 100% comprehensible to each and every student!! No easy feat I can tell you! Today because 6/7 Clark wanted to reach the target of 40 minutes, we went into recess slightly and ensuring comprehension remained, I had to resort to a few quick written translations on the board so that I could continue without blurting myself!! Made me feel a little guilty but it is sooo hard when we have only been using TCI properly for barely 8 weeks!!

2 thoughts on “Staying in the Language”