I discovered TPRS (Teaching Proficiency Through Reading & Storytelling) towards the end of last term on Martina Bex’s blog. She is a Spanish teacher working in Alaska and is regarded highly amongst her peers in the field of language teaching.
This pedagogy resonates with me for several reasons. Firstly, I remember how important sentence and word repetition is for young students learning how to read and write. It has been a constant source of frustration for me that there are limited Indonesian storybooks/texts which incorporate predictable and repetitive sentence structures. The Seri Mari Membaca books are brilliant for this and are leveled but unfortunately they are the only book series I have discovered and not only are all the authors definitely not native speakers but the illustrations, while of Indonesian people, are totally out of date and old fashioned and reinforce culturally inappropriate and inaccurate stereotypes! 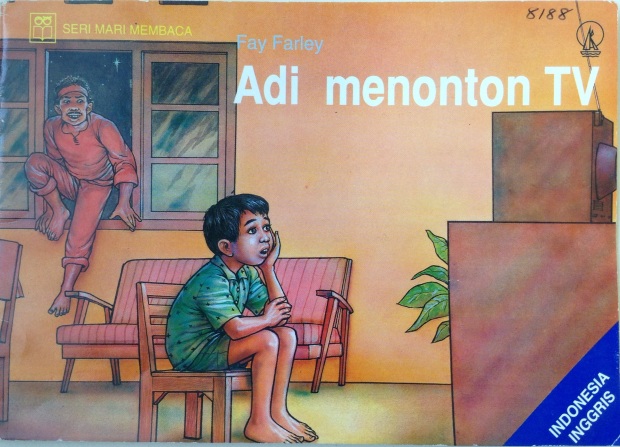 Secondly, TPRS is a pedagogy that for me, addresses an issue first raised by Bu Febi when she visited us in 2011. One day after our lessons had finished and we were chatting generally about my Language program, Bu Febi offered me some advice. She recommended that I needed to incorporate more spoken Indonesian into my lessons. She was right! 98% of the language in my room at that point was English. I agonised over this for years because I knew I should reverse this but I couldn’t see how I could. Finally, the last point which makes TPRS a style of teaching I want to explore in more depth, is the recent approval of the new (Australian) Indonesian Curriculum. I have attended workshops and conferences devoted to familiarising teachers with our new curriculum, however I still remember my very first introduction to it with Andrea Corston. What jumped out initially for me was the amount of spoken language teachers were now expected to incorporate into their teaching. These 3 points have been recently niggling in the back of my mind while on Pinterest or Twitter or while searching for language teacher’s blogs.
Once I began researching TPRS in greater detail, it became clear just how well TPRS addressed all these issues. I then watched a few YouTube videos and I was instantly hooked. I couldn’t wait to try it with my students. About week 8 last term, and at a point where the upper primary classes – whose term outline and planning had gone down the gurgler because of the difficulty of finding mystery Skype partners in Indonesia or Asia (school holidays, Ramadan, new school year)- I was provided with the perfect opportunity to trial TPRS.
I first started with the year 5’s and 6’s. I even pushed all the desks to the back of the room and had them sitting in a semi circle on our stools, which actually worked well because it emphasised that we were about to embark on something totally different. To start with, I focused entirely on ‘Kenalkan’ (introducing oneself) language which was for several reasons. Firstly, it was personal; an important aspect of TPRS, and secondly I could begin with a topic that would be based on vocabulary students were already familiar with and therefore hopefully would be less threatening for them. The new words I did introduce were:
tidak (no/not),
paham (do you get it?/ understand?),
Astaga (OMG),
laki-laki, perempuan (boy/girl),
kamu (you),
dia (he/she) and
kami (we).
It was exhausting but oh so exhilarating. After the first class, I asked students what they’d thought of it and they admitted that at first when I’d stated that we would only be using Indonesian in that lesson, they’d been concerned but once we got going, they just loved it. The only negatives were that at times I went too fast and that sometimes students got too carried away shouting ASTAGA to encourage each other!! Their positive feedback blew me away.
However I knew my toughest and most honest critics would be the year 6/7 class (11 – 13 year olds), so I dug deep and led them through a lesson too. Considering that in the class that week was a student on exclusion and 2 other reasonably recent transfers, all from the same school, (where they too have an awesome Indonesian language program) and therefore included 3 students who do not have the same depth of relationship with me that the others have, the lesson went smoothly. I began with asking individual students, “Nama saya Bu Cathy, siapa nama?” (My name is Bu Cathy, What’s your name?) a format they are all familiar with but then I began PQA, eg, “Ini Mitchell?” to which they could answer ya or tidak. At this point, I realised that I should have also incorporated mentioning ‘bukan’ into my circling script but as it was my first lesson, I hadn’t thought that part though beforehand. Hopefully one day I will be able to seamlessly incorporate successfully a grammar ‘pop-up’ within a lesson! I next progressed to, “Saya tinggal di Port Elliot” and after that, “Umur saya dua belas.” I then called for 2 volunteers – Flynn & Oscar- and we did some more PQA about the 2 boys. With the other classes, I usually stopped there, but with this older class, they then had to write non stop for 7 minutes using only Indonesian. This was very interesting. I gave no direction, only that if they couldn’t write sentences, they could just list words, it just had to be 100% Indonesian. Surprisingly, only a few wrote a paragraph about themselves, they mostly wrote unrelated sentences or words. After the 7 minutes were up, I then asked them to count the number of words they had written and then give me some feedback on the lesson. I asked for a positive comment and a negative comment. Here are their responses:

Isn’t that fascinating! For me, their feedback clearly demonstrates that their introduction to TPRS was largely enjoyable and definitely worth repeating.
The other feedback that comes through loudly and clearly is that I expected them to learn too many new words in one lesson and did not circle them enough. If I look back at the basics of TPRS, I can see that I tried to cover all 3 steps in just one 50 minute lesson!! I also need to incorporate more activities into the lesson like brain breaks, so that students are not sitting still for so long.

9 thoughts on “My Initial Attempt with TPRS”