This week, I tried something new….

I have been ready to move on to a new target structure and with only 4 short weeks left of term 1, I didn’t want to begin anything major. This type of window provides the perfect opportunity to trial an idea and if it works, its a bonus and if it flops, then there’s absolutely no harm done and we can merely chalk it up as experience.

Our stories have usually focused on structures that help us stay in Indonesian when communicating with each other in the classroom. The story this term introduced the phrases, open the door & close the door which are both very handy in summer and winter! ‘buka’ &’tutup’ are useful in themselves too and it wasn’t till we added them to our repertoire, that I discovered just how useful they could be. Another verb that I really need to is ‘get’ (ambil). I often ask students to get a clipboard, a pensil, a penghapus etc. So last week, I set out with that intention.

I began with having the word up on the board and asking students to copy me saying it a million times using a variety of voices. I love doing this and wish I had a greater ability to mimic well known characters! I also love singing the words because this gives me the opportunity to stress syllables slowly and clearly. Students just love opera singing!! Its hilarious watching them doing this! Maybe they get just as much enjoyment from watching me!! Following this is an explaination of  what ‘ambil’ means along with asking for a hand gesture which clearly demonstrates its meaning. I only choose one gesture for the entire school, so I encourage students in each class to demonstrate their suggested gesture repeatedly while I search for the student whose gesture is either identical to or very similar to the initial gesture that I chose during the very first lesson of the week. I then give kudos to the student whose gesture was ‘chosen’ by looking them in the eye and giving them a big smile! It truly makes their day! We then as a whole class practice their gesture while simultaneously  verbalising the structure chorally.

Then instead of circling to chase those repetitions, using either a picture, powerpoint or student, my distributors handed out a pensil, clipboard dan kertas to each student. Then I asked students to lipat (fold) then lipat again (while demonstrating to minimize using English). I could then ask students to ‘buka kertas’ ( open the paper – got a rep of buka in- what a bonus!) and number each quarter. I then gave the instructions while gesturing to clarify my meaning: Bu Cathy berkata dan murid menulis. After clarifying the meaning of menulis (write), I said the sentence, “SpongeBob ambil sprite.” and students wrote it in square nomor satu. I clarified that only the Indonesian must be spelled correctly!! Then  I asked students to menggambar SpongeBob ambil sprite.

I got so many repetitions of ‘ambil’ and students through illustrating each of the 4 sentences truly demonstrated that they understood and comprehended it. It was a fun way of having all students fully focused and on task. They loved it.

Enjoy the following selection of work from one of the year 5 classes. 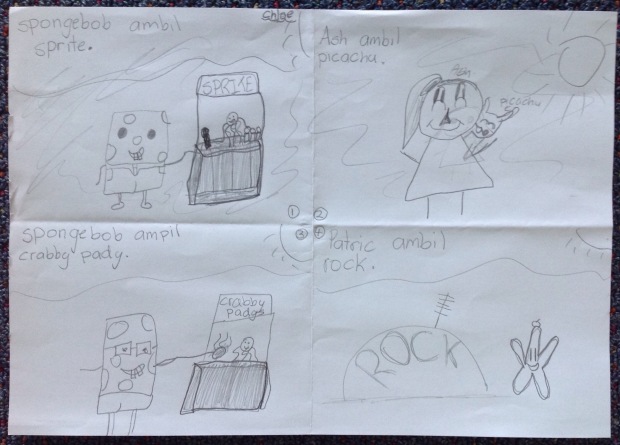 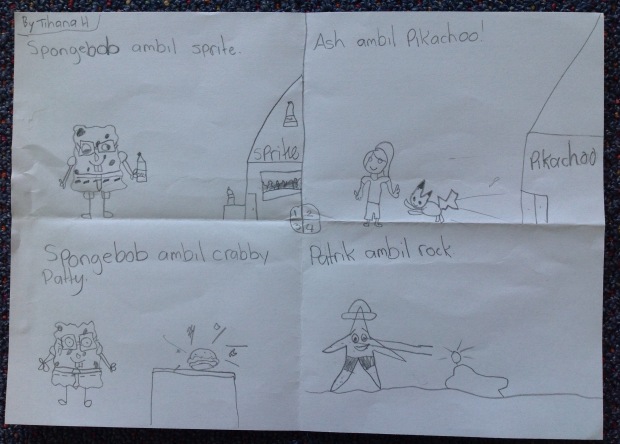