After a mammoth flight via Singapore & New Delhi, I am finally here in Paris. I can’t believe that I am so much closer to Agen and super ready for the TPRS conference.

Leading up to my departure, I was very excited until the week before when I remembered that  my knowledge of French is almost zilch. I suddenly became incredibly nervous about not being able to communicate in French. While everything I’ve read assured travellers to France that English is widely spoken here, I still dreaded my arrival into Charles de Gaul airport where I was convinced I would need help. It was the first flight ever that I wished would not end but of course it did!! I deplaned and was immediately surrounded by people chatting in French. My bag was one of the last to appear on the conveyor belt and it was with relief I spotted it because the idea of talking about lost baggage could have tipped me over.

It has been fascinating, in a macabre fashion, observing my reactions to upcoming conversations. My knowledge of French is simply bonjour, merci and une baguette.  The first 2 picked up through reading and the last from my previous trip to France in 1991. While in the almost 2 days I’ve been on French soil, not one person has spoken rudely or impatiently with me yet the idea of speaking has me quaking. I open my mouth to speak and my brain scrambles to work out what to say. Several times a mixture of Indonesian and English have come out! It is so stressful yet as a language teacher, a valuable and interesting experience.

Today my plans have all changed due to Versailles nor opening on Mondays, thunderstorms and the Bibliotheque Francois Mitterrand (National French Library) not opening till mid-afternoon. I found through TripAdvisor, a small cafe close to my airbnb and walked through the rain arriving a few minutes before it opened. It is so warm and dry inside and I’m enjoying my first coffee – latte with late de soja- perfect for a wet, cool day. It’s lovely sitting down and letting the French conversation flow around me although the English music in the background seems strange and is definitely unwanted ‘noise’. 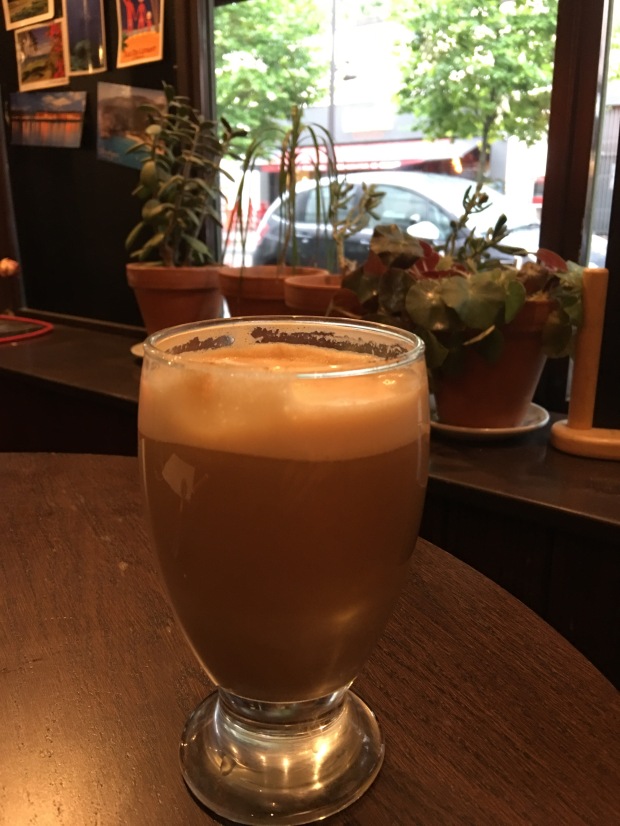 Why do most language teachers expect and demand that their students speak? When I open my mouth to speak French, my affective filter is ramped up to the highest level because I expect to fail. A little while ago, when ordering coffee, the lovely girl behind the counter preempted the coffee, but adding the soya milk detail flustered me. I was confident that I would mispronounce the word (it was written up on the menu board) and I did! It took me several goes before she worked out what I was asking. Even though the failing was no surprise, it justified my lack of confidence. If just a phrase has that much impact, imagine how much worse it would be reading a sentence!! One error after another. Guaranteed!

Excuse me for a minute, I need to ask for the wifi password. Hang on. There’s a few things I need to sort out beforehand…. firstly;  how do I get the girls attention politely? Secondly, is ‘wifi’ the same in French? Thirdly I must remember to say merci!! Right? Ready? Come on! It’s not that difficult. Stop stalling. You can do it!! I’ll just wait a little longer because she is busy serving.  Right, here goes.

Ok, that wasn’t hard. Drats. I forgot to say merci!