Lupa, Lupa Ingat (also know as Lupa Lupa tapi Ingat) is a brilliant song for using in the Indonesian Language classroom because of the minimal number of words in the lyrics as well as the constant repetition. The two main target structures are ‘lupa’ (forget) & ‘ingat’ (remember) – two very useful words!!

The song is sung by a band originally called Kuburan (The Grave – as in cemetery grave) however in 2011, they changed their name to The Kubs. They are a Gothic band and were originally  heavily influenced by Kiss which is very obvious when you watch their official clip! While the song itself would be appropriate for all year levels, I tend to use it only with year 6/7’s because the clip could be a little too confronting for younger students.

Teaching this song using TCI/TPRS has been heaps of fun. Whereas previously I relied on the quirkiness of the clip to engage students, it hasn’t been at all necessary this time. In fact, most classes have yet to see the clip! I am planning to save that for the finale. Instead of the song clip, I’ve been using a karaoke clip that just has the lyrics written up on the screen. The beauty of this, is that the focus is purely on the lyrics with no visual distractions. There are quite a few posts around with activity/lesson ideas and here are a few of the suggestions I have trialed successfully after pre-teaching the 2 main target structures. I decided to do this using tongue twisters as they are good fun and yet tricky to remember! It was awesome too, providing opportunities to those clever 4%-ers to shine!!

The tongue twisters I chose were:

I chose these 3 because they were short, quirky and each contained at least one familiar word. The final one in particular was chosen because it could be expanded to include the word ‘kunci’ which is one of the words from the song lyrics! 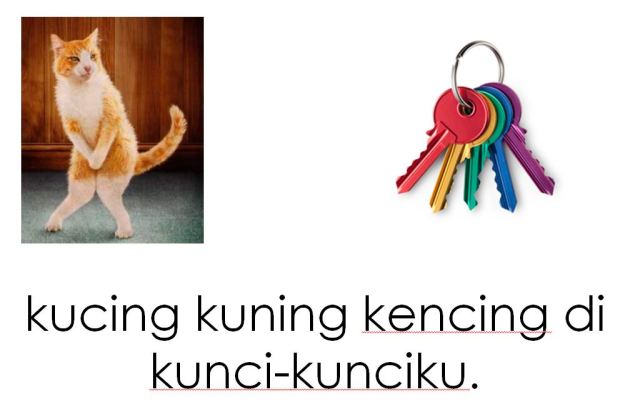 The above images are from a PowerPoint I  made using images from Google images. I then incorporated a slow fade for the text, so that when students felt that they could ‘remember’ the tongue twister well enough to repeat it, I tapped the board and the text vanished slowly giving them the opportunity to restate the tongue twister from memory!

After this, I found a few blogs that had ideas for teaching songs. The best (as usual) was Martina Bex‘s The Comprehensible Classroom, I found this post with heaps of ideas. Admittedly the majority of the ideas in this post are aimed at more complex song lyrics and also for older students, but none the less, I still got quite a few terrific ideas here.

Following are some of the successful ideas I used for teaching this song:

Here are a few more of the ideas from Martina Bex’s blog that I hope to try next:

PS: A great tip for avoiding pesky/ inappropriate advertising that we get when using YouTube clips in class – ViewPure is your answer. I have a ‘purify’ tab bookmarked and it is awesome. When I find a video I want to show in class, I just purify it, save to the appropriate folder and then its ready to go. The other bonus of this, is that I can load it up at the beginning of the day, and it sits waiting for me to push play. After showing, it also stops right there – it doesn’t go on to play another clip which is another potential hazard with You Tube!